A couple notes this Sunday. My friend Daniel Marans is in Alabama and noted that there is a surprising amount of openness towards the  candidacy of Vermont Independent Senator Bernie Sanders:

It’s not news, but one thing that’s striking as I talk to attendees at the Martin and Coretta King breakfast in Selma — where Clinton and Bernie will both speak — is the extent to which Sanders’ 2016 performance here was a function of Clinton’s popularity, not dislike for him.

I spoke to several middle-aged Clinton 2016 voters who said, unprompted, that they were seriously considering Sanders this time. The reasons? Mainly health care and education.

Most Democratic voters in the South are African American, a function of racial polarization of politics in that region since the late 1990’s and early 00’s.

Meanwhile, my former colleague Glenn Greenwald is up at The Intercept, pointing out how former Clinton 2016 staffer Zerlina Maxwell who is today an MSNBC regular claimed that Sanders avoided discussion of race and gender until late into his launch address in Brooklyn. Greenwald points out this is false. In response, Maxwell’s response then is that Sanders isn’t “talking about race and gender,” because he’s talking about substantive policy issues that impact women and racial minorities instead.

Ok. I’ve rewatched since yesterday and while I can acknowledge that I missed the passing line at 6 minutes I stand by my point since talking about criminal justice is not the same thing as talking about race and gender and if you don’t get why Bernie won’t win….again. ✌🏾 https://t.co/1FxE2dgQuB

This is a semi-religious belief among upper-class liberals, that minorities just want some kind of conversation about “race and gender” instead of substantive policy addressing issues that, to Maxwell’s apparent ignorance, impact men and women, whites and blacks. Folks who are economically secure in particular really like to have the emotional satisfaction that comes with discussing “white privilege” or a smattering of issues that impact next to no one (like the use of affirmative action at a handful of elite colleges). But that’s not true of the public at large.

As I wrote in January, there’s actually polling about this. Midterm surveys by the African American Research Collaborative found that the issues African American voters in battleground districts cared most about was the economy and health care. 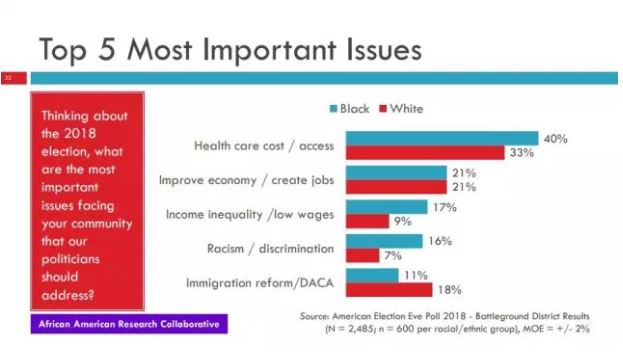 One thought on “Black voters care mostly about the economy and health care, not esoteric upper-class conversations about race and gender”